During the COVID-19 pandemic, increased oxygen demand pushed Malawi’s medical oxygen systems beyond capacity. PATH partnered with the Malawi Ministry of Health and UNICEF to increase long-term access to this lifesaving resource. 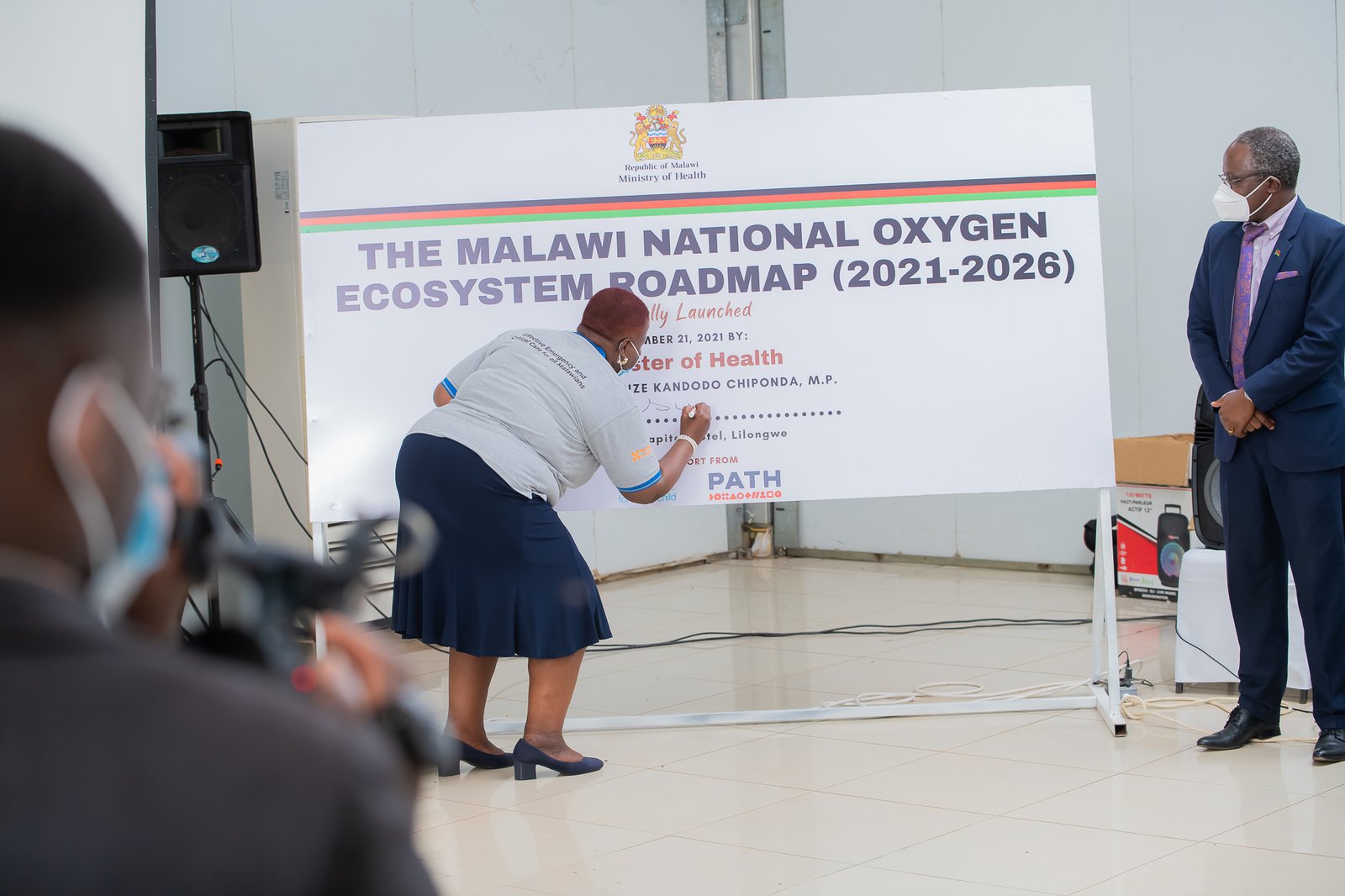 Oxygen access has been a long-neglected element of health system planning, despite being an essential treatment for a range of diseases. Many health facilities in low- and middle-income countries lack functioning oxygen delivery systems, and this need is further strained by the rising demand due to the COVID-19 pandemic. Timely and robust planning for reliable oxygen delivery is needed to protect and save lives.

One such country is Malawi, where oxygen systems do not adequately meet the population’s current needs. For example, childhood pneumonia—which accounts for 11 percent of deaths in children under 5 years old in the country—can be reversed with oxygen therapy, but access to treatment is inconsistent for all who need it. Additionally, surges in oxygen demand due to COVID-19 have emphasized shortfalls in oxygen production capacity, shortages of equipment and supplies, and challenges to quickly source oxygen from suppliers.

The national oxygen need—exclusive of COVID-19—was estimated at over 115 million liters (or nearly 17,000 cylinders) per month.

PATH, in partnership with UNICEF, was well positioned to support the government of Malawi in the development of their first national medical oxygen roadmap—an evidence-based plan to effectively scale up oxygen access across the country. The following three steps were critical to successfully moving this effort forward:

To strengthen access to medical oxygen in the country, it was critical to first understand how much oxygen is needed, how much is currently produced and delivered, and the estimated gap between the two.

As a dedicated forum for partners, civil society, and government to coordinate on oxygen, the Malawi Oxygen Emergency Taskforce served as a key platform to share technical expertise, present data and updates on oxygen interventions, discuss financing opportunities, and organize an emergency response for oxygen during COVID-19 surges. It became the natural conduit for the development of the national oxygen roadmap, and allowed PATH, UNICEF, and the Malawi MOH to effectively collaborate with other key stakeholders on the objectives and activities laid out in the document.

Next, PATH and partners used these data, as well as consultations and collaboration with key oxygen stakeholders, to develop and launch the country’s first National Medical Oxygen Ecosystem Roadmap. The roadmap builds on ongoing oxygen work in the public and private sectors, supports the optimization of medical oxygen investments, and guides future investments from government, partners, and private-sector actors.

Malawi’s National Medical Oxygen Ecosystem Roadmap was officially launched by the Ministry of Health on December 21, 2021. It provides a structured and attainable plan to establish and maintain a comprehensive national medical oxygen ecosystem—the collective of people, processes, equipment, and logistics that are required to deliver oxygen from a production source to a patient.

The primary goal of the roadmap is to reduce morbidity and mortality from hypoxemia (lack of enough oxygen in blood) and ensure oxygen is available to treat all clinical cases in which oxygen would be beneficial. It proposes national oxygen system improvements through a set of strategic objectives and interventions to implement from 2021 to 2026 and will complement the Malawi Ministry of Health's Emergency and Critical Care Strategy (2021–2031).

To bring this roadmap to life, government decision-makers need to become its champions, assuring it is read widely and discussed by diverse stakeholders who have financing and policymaking capabilities.

The 10 strategic objectives of the roadmap include:

To bring this roadmap to life, government decision-makers need to become its champions, assuring it is read widely and discussed by diverse stakeholders who have financing and policymaking capabilities. Malawi must explore and invest in infrastructure, partnerships with the private sector, and supply chain and logistical solutions to scale up oxygen access cost-effectively across all levels of the health care system to ensure this lifesaving commodity is available for the most vulnerable patients.

About PATH’s work in oxygen

PATH has been implementing comprehensive approaches to increase access to medical oxygen for over a decade. This work has included supporting normative policy change by the World Health Organization, strengthening markets for oxygen technologies and supplies, raising awareness about the importance of oxygen through advocacy, and supporting countries to improve reliable access to a comprehensive respiratory care treatment package.

Since 2020, PATH and its partners have been supporting country decision-makers in the development and execution of a comprehensive respiratory care plan via the COVID-19 Respiratory Care Response Coordination project. The initiative is also pursuing strategies to help prioritize and improve access to oxygen therapy and other essential equipment involved in respiratory care as an integral part of health systems strengthening, beyond the pandemic response—as is the case in Malawi.