Case study: India’s leadership in the fight against Japanese encephalitis

Summary: India has been, and can continue to be, a model for how countries introduce the Japanese encephalitis vaccine. The World Health Organization now recommends the strategy that India employed: first conducting catch-up campaigns in high-burden districts before transitioning to routine immunization.

In 2005, a massive outbreak of Japanese encephalitis (JE) occurred in the Indian states of Uttar Pradesh and Bihar. Thousands of people fell ill, and more than 1,500 died.

When the outbreak hit, authorities in India recognized that ongoing mosquito control measures, such as spraying insecticides, were not stopping the virus. They needed an affordable, safe, effective, and long-term solution.

They needed a vaccine.

The outbreak prompted officials to intensify efforts and implement a national strategy for JE control through immunization. Over the next 10 years and beyond, the government of India (GoI) successfully implemented a sustainable and effective JE vaccination program—first, by vaccinating India’s children at highest risk and then by expanding routine JE vaccination in hundreds of endemic districts across the country. Thanks to India’s leadership, other countries in Asia have a strong example of how to tackle this once-neglected disease.

Here’s how India fought back and, along the way, paved the way for other countries to tackle JE.

Japanese encephalitis is an inflammation of the brain caused by a virus, which is transmitted to humans by mosquitoes.

By the time of the 2005 outbreak, JE was already a known threat. Because of India’s increasing irrigation of rice fields that act as a breeding ground for JE-infected mosquitoes, this risk was likely increasing. India’s first clinically confirmed JE case was in 1955, with outbreaks occurring regularly in several high-risk areas across the country. The first major epidemic was reported in 1973, followed by another outbreak in 1976. Noticing the threat of JE, the National Vector Borne Disease Control Program (NVBDCP) began monitoring JE incidence nationwide in 1978. Over the next 40 years, cases of JE were regularly reported in 26 states and territories, and outbreaks occurred in 15 states.

In an effort to address JE, the government introduced vector control measures, such as insecticide spraying, in the 1970s. These measures, however, had little impact on the burden of disease.

For decades, Japanese encephalitis has been a seasonal risk for Indians who live near the rice paddies, where the virus-carrying mosquitoes breed. Photo: PATH/Julie Jacobson.

Building a strong foundation for JE control in Andhra Pradesh

PATH’s initial work on JE immunization in India began in 2000 in Andhra Pradesh. PATH was working in partnership with the government of Andhra Pradesh to strengthen routine immunization services and introduce hepatitis B vaccines. Conversations with district- and state-level health officers, however, revealed growing concern about JE. Investigation of encephalitis outbreaks and improved disease surveillance and diagnostics suggested a previously unrecognized high incidence of JE, prompting the government of Andhra Pradesh to act quickly. With technical assistance from PATH, Andhra Pradesh successfully introduced a mouse brain-derived JE vaccine in 2001. In the first year of vaccination, observed JE cases reduced by 90 percent.

This experience was shared across India and prompted Indian government ministries, the World Health Organization (WHO), UNICEF, and PATH to establish a cross-sectoral India JE working group to coordinate technical support and information-sharing. The working group developed a roadmap for planning JE vaccination programs. Repeated outbreaks, combined with national awareness-raising advocacy campaigns, drove the governments of various Indian states to raise their voices and demand solutions for JE control.

The GoI heard these requests. After the deadly JE outbreak in 2005, the GoI decided to incorporate lessons learned in Andhra Pradesh to initiate a large-scale, unprecedented emergency vaccination campaign in all of India’s JE-endemic states to protect children from future outbreaks.

Just one obstacle stood in the way: they needed a different vaccine.

While an Indian-produced, mouse brain-derived vaccine was used to immunize children in Andhra Pradesh and other areas, the available supply fell far short of the volume needed to reach children across the entire country. Around 100 million children in India would need to be vaccinated, and the manufacturer of the existing mouse brain-derived vaccine could only produce less than half a million doses per year. The vaccine also had a complicated dosing schedule and was very expensive—both challenging obstacles to vaccination programs.

Another vaccine produced in China, now known as CD-JEV, offered a potential solution to India’s challenges. CD-JEV was safe, effective, and affordable and required only one dose to achieve immunity. PATH spearheaded negotiations with the vaccine’s manufacturer, the Chengdu Institute of Biological Products, to establish a price that was affordable for low-resource JE-endemic countries. Based on recommendations from technical experts and existing evidence on the vaccine’s safety and efficacy from China and Nepal, the first country outside of China to use the vaccine, India self-financed and imported CD-JEV for the vaccination campaign.

Based on recommendations from technical experts, including PATH, and existing evidence on the vaccine’s safety and efficacy, India self-financed and imported the Chinese CD-JEV vaccine for the vaccination campaign. Photo: PATH/Julie Jacobson.

With a safe, available, and affordable vaccine in hand, the GoI launched a large-scale, five-year JE vaccination campaign in 2006. It was India’s most ambitious immunization program to date. In just the first year, the campaigns targeted children and adolescents in 11 high-risk districts of four states and reached more than 9 million children. Vaccines were administered to 88 percent of the target population. Over the course of the five-year campaign from 2006 to 2011, nearly 78 million children in 109 districts of 15 states were immunized against JE.

In just the first year, the vaccination campaigns targeted children and adolescents in 11 high-risk districts of four states and reached more than 9 million children. Vaccines were administered to a total of 88 percent of the target population.

Following the success of the five-year campaign, the government of India knew it needed to scale JE vaccination to additional JE-endemic districts and transition from campaigns to sustained routine immunization. New districts and states were reporting JE cases, and low routine immunization coverage rates left room for improvement. Using surveillance data to prioritize higher-risk areas, JE vaccination gradually expanded from the initial 11 districts in 4 states to 269 districts in 21 states between 2011 and 2018. The GoI has targeted 669 districts—almost all of India—for eventual scale-up.

PATH continued to support India’s JE control efforts in the transition to routine JE vaccination. From 2013 to 2015, the governments of Uttar Pradesh and Bihar asked PATH for assistance with scaling up and improving coverage of their JE routine immunization programs, as well as improving clinical management of encephalitis cases to reduce mortality. At the national level, PATH helped strengthen India’s nationwide encephalitis surveillance efforts and helped conduct vaccine impact assessments.

As PATH’s 15-year JE project comes to a close, the efforts of Indian officials to combat JE have continued to grow. As of mid-2018, coverage of routine JE immunization in the districts with the vaccine is estimated at 65 percent. Since 2006, roughly 156 million Indian children have been vaccinated against JE, and India continues to self-fund the vaccination program using the affordable CD-JEV vaccine. An additional 38 districts are planning to conduct JE vaccination campaigns in 2018 and 2019.

Using India’s JE experience as a model for other countries

Lessons learned in India informed other endemic countries’ experiences as they considered JE vaccine introduction. Because India was only the second country outside China to use the CD-JEV vaccine, data on its use and evaluation in India reinforced earlier data on the vaccine’s safety and effectiveness and contributed to the WHO prequalification of CD-JEV in 2013.

India’s experience also helped inform WHO recommendations on JE vaccine introduction strategies in other countries. India’s strategy of conducting catch-up campaigns in high-burden, high-priority districts first, followed by routine JE immunization, was recommended by WHO and has been mirrored by several other countries.

Perhaps most importantly, India set an example for the region. From the beginning, the driving force behind India’s efforts against JE has been the desire of local, state, and national officials to sustainably protect children from a dangerous disease. Building on a strong foundation of both local and global evidence, input from partners, and ever-adjusting strategies informed by experience, India is making significant progress in reducing the burden of JE.

Other countries can do—and are now doing—the same. 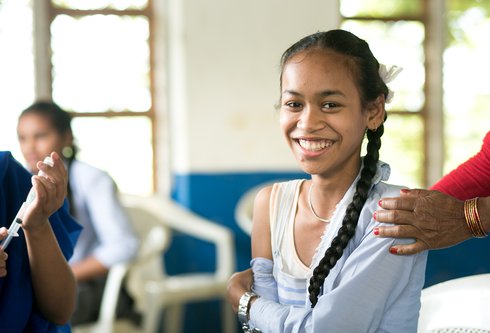 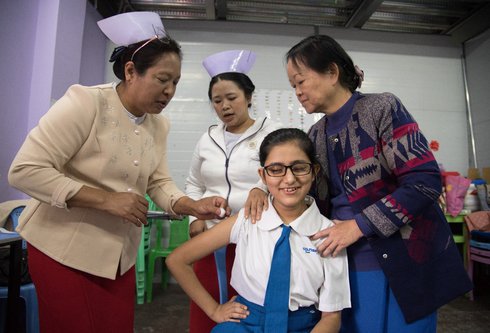 How do you protect 300 million children from deadly diseases? Partnerships are key 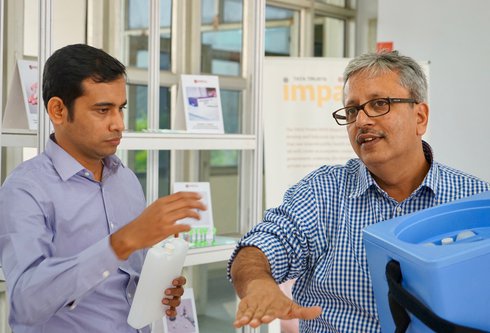