It IS possible to change a woman’s fate

We're increasing the use of new technologies for cervical cancer screening and treatment in Central America.

PATH staff and in-country partners work together to increase screening and treatment coverage.

I’m a native Spaniard, but this was my first visit to Central America. Landing in Managua at midnight, I got the sense of a large, but quiet, city. By the next morning, my nighttime image was completely transformed—Managua, and later Guatemala City, is busy and bustling, crowded with traffic, people, and discrepancies. As I traveled in town and outside, I saw distressing signs of social inequity—contrasting like night and day. Both luxury and poverty were apparent.

I had been a colleague of PATH for years as part of my job at the cancer institute in Barcelona, but I only recently joined the team in Seattle to manage the Scale-Up project. Scale-Up focuses on increasing the use of new technologies for cervical cancer screening and treatment. Accompanied by teammate Francesca Holme, my purpose in Nicaragua and Guatemala was to see what progress had been made expanding access to cervical self-sampling to detect the human papillomavirus, or HPV (the virus that causes cervical cancer). We also wanted to know how our government partners felt about a new device for treating precancerous lesions, called a thermocoagulator (it uses heat to destroy mutated cells).

HPV DNA tests are major improvements over tests we have been using in Spain and the US for many years. The new tests are much more sensitive than Pap smears, and results become available much more quickly. When implemented with a self-sampling protocol (women use a small, soft brush to collect vaginal mucus themselves), countries have the potential to screen many more women than ever before.

Meeting with high-level leaders from the ministry of health and local nongovernmental organizations, we were anxious to hear about their experiences in the field and to help the leadership think about how to grow the program and reach more women no matter where they live—whether in the city near a hospital or in the countryside, far from even a simple health post.

A project like Scale-Up offers in-country colleagues the opportunity to try out approaches of which they would not otherwise have been aware. After more than three years of collaboration, PATH, the local investigators, and their leadership have developed a culture of trust, respect, and anticipation that, finally, prevention of cervical cancer in their country is a possibility.

“A project like Scale-Up offers in-country colleagues the opportunity to try out approaches of which they would not otherwise have been aware.”

One highlight of our trip occurred during an information session in a hospital in Guatemala, where we were accompanied by the vice minister of health, Dr. Molina. Rows of white plastic chairs soon filled, and more were brought in as other staff joined us. First, we heard from Dr. Claudia Camel describing the successes they were seeing with HPV DNA self-sampling. She explained that in the “old days” screening results often would take weeks or months to arrive. All that time women had to anxiously wait and wonder what the test would say. Now, with HPV testing, they get results in a week or less—both patients and health care providers love it!

Another problem with the old system was having to travel long distances for precancer treatment if the test was positive. And if there was no gas for the cryotherapy machine the day she arrived, the patient was out of luck and had to come back another time. But the new thermocoagulation device changes all that. Francesca and I witnessed a graduation ceremony—Teresa had passed her thermocoagulation course! Small in stature but big in heart, Teresa, a nurse, beamed with pride as she received her training certificate and a gleaming white lab coat. Teresa’s thermocoagulation office is tiny but big enough to do the job, and she can take the portable treatment unit with her to remote areas. It doesn’t require gas, so there are no disappointing conversations about “vuelva Usted mañana” (come back tomorrow).

Our visits in both countries wrapped up with debriefs with the minister of health, and in Guatemala, with the First Lady. Committed leaders like them, supported by dedicated staff like Teresa and Dr. Camel, brandishing new, more appropriate technologies, suggest to us and our Latin American friends that the end of cervical cancer as a serious public health problem may well be in sight. 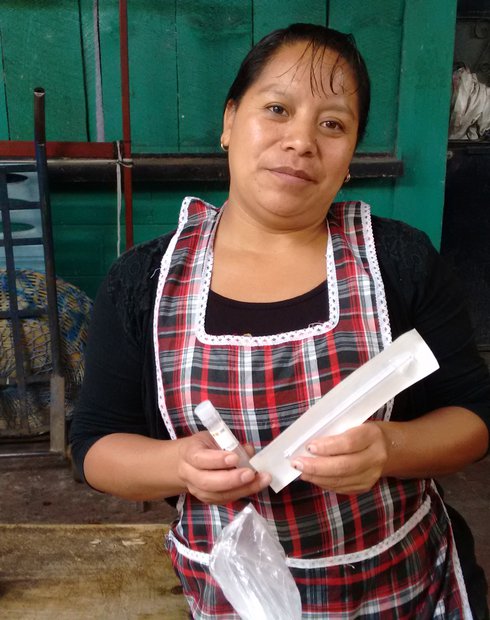